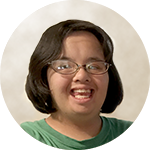 Eden Rapp works at MOD Pizza in Rolling Hills Estates and music is her passion.  Her goals are to become a stronger self-advocate, a woman of faith, and to learn how to be independent. In 2019, she lobbied in Washington, D.C. for 2 bills as a National Down Syndrome Society ambassador. After talking with her senators’ staff about The Transformation to Competitive Employment Act, in fact, Kamala Harris decided to co-sponsor that bill. She also lobbied for the Marriage Access Act for people with special needs so that getting married does not force them to lose benefits.

Eden also leads a club for young adults with disabilities to become stronger self-advocates and better readers. She also teaches them independence like money skills, safety, how to have meaningful conversations, and more.  In 2019, Eden participated in a webinar called Finding Your Voice, which inspired her to come up with her own curriculum. She has led workshops for the National Down Syndrome Congress conventions. To help her become a better speaker, she is part of Toastmasters, and earned her Competent Communicator award in 2019.