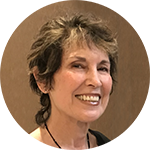 A speech pathologist, Connie Lapin has been a lecturer and family advocate for children and adults with Autism Spectrum Disorders and other developmental disabilities for over 50 years. When her son Shawn was diagnosed at age two, in 1970, there was a dearth of information and no services available. Her youngest son, Erik, is a Judge Advocate in the United States Army. He has served in both Afghanistan and Iraq. Her older son, Brad, is an exceptional & sensitive professional in Autism.

Connie has testified before government bodies, lectured at universities and conferences, and made appearances on television and radio. Connie’s accolades include “Woman of the Year” in Assemblyman Bob Blumenfield’s district, and a Lifetime Achievement and Meritorious Service for Autism from Senate Pro Tem Darryl Steinberg. Connie and her husband, Harvey, recently received a commendation from the California State Senate for their contribution to advancing the rights of people with developmental disabilities.

As former co-chair of the Government Relations Committee for the Autism Society of Los Angeles, she helped lead the successful effort in California to enact Self-Determination legislation that was signed in October 2013 by Governor Brown.